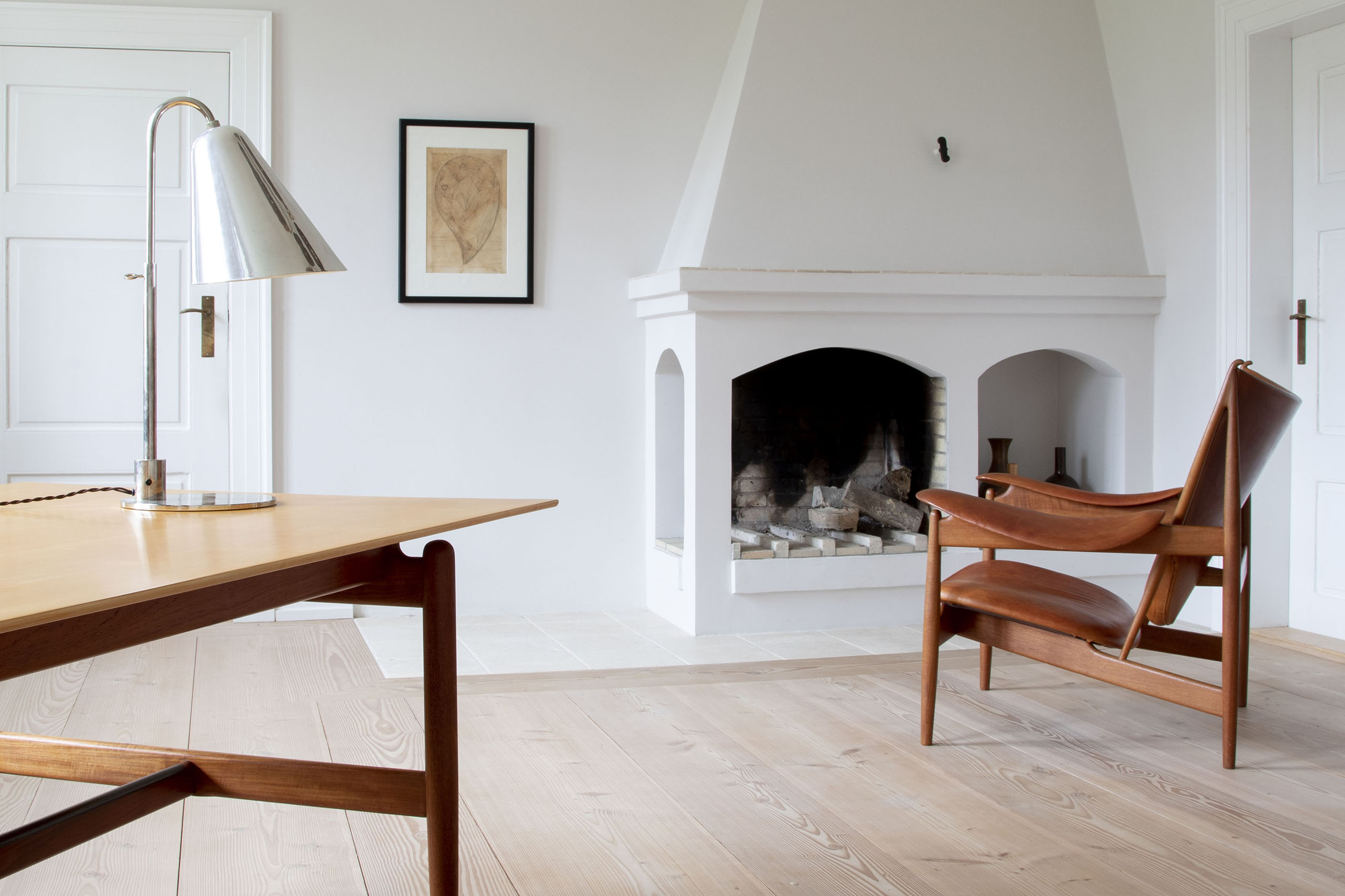 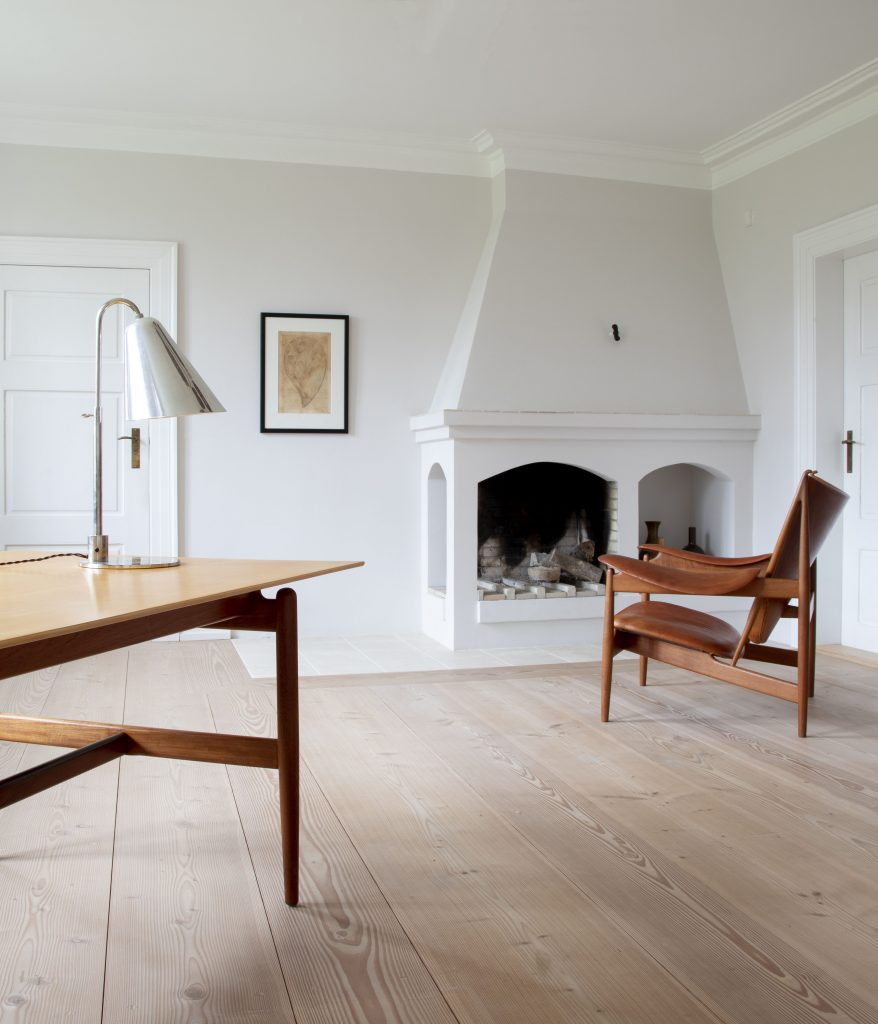 Finn Juhl (1912-1989) is indisputably one of the most innovative furniture designers of the 20th Century.  In the 1940s he broke with the established furniture tradition and designed several expressive and sculptural creations that regenerated Danish furniture design and paved the way for the international recognition of modernist Danish furniture. Juhl initially wanted to study art history, but eventually enrolled at the Royal Danish Academy of Fine Arts, School of Architecture. Trained as an architect he always emphasized that as a furniture designer he was self-taught. He had not studied under the influential Professor Kaare Klint at the Academy’s Department of Furniture Design, nor had he trained as a cabinetmaker like many of his contemporaries. However, his profound interest in fine art remained an inspiration throughout his career and his design is characterized by an unmistakable artistic touch that stood out from the established Klint-school with its free sculptural forms. 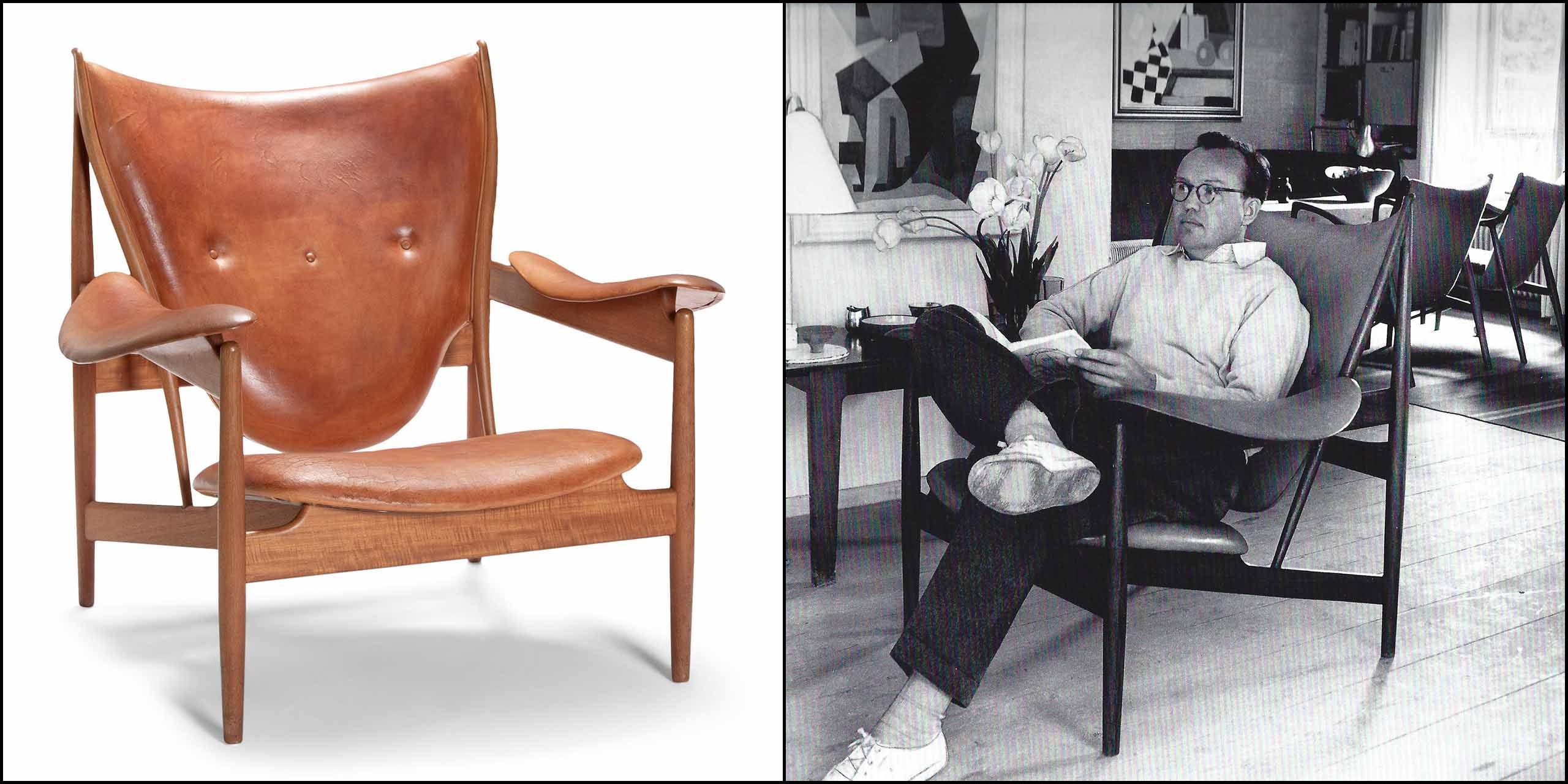 Finn Juhl in his remarkable Chieftain chair. The chair was presented at the Copenhagen Cabinetmakers’ Guild Exhibition in 1949. It is a very sizeable chair, yet it does not appear heavy. The distance between the seat and the armrest allows the surrounding space to flow freely between the upholstered elements, just as the frame with its triangular spaces is visually balanced and elegantly finished.

The renowned collaboration between Juhl and cabinetmaker Niels Vodder (1892-1982) began in 1936. Vodder was forty-four years old and a well established and highly sought-after craftsman, but it was his collaboration with Finn Juhl that would cement his reputation as one of the best cabinetmakers in Denmark. By all accounts Vodder was a very progressive and clever businessman who had been looking for someone to rejuvenate his trade.

That someone was Finn Juhl, who at twenty-four years old, turned up at his workshop, requesting to have some furniture made according to his drawings. Vodder immediately recognized Juhl’s artistic talent and his creative urge for taking the Danish furniture tradition in a new direction. 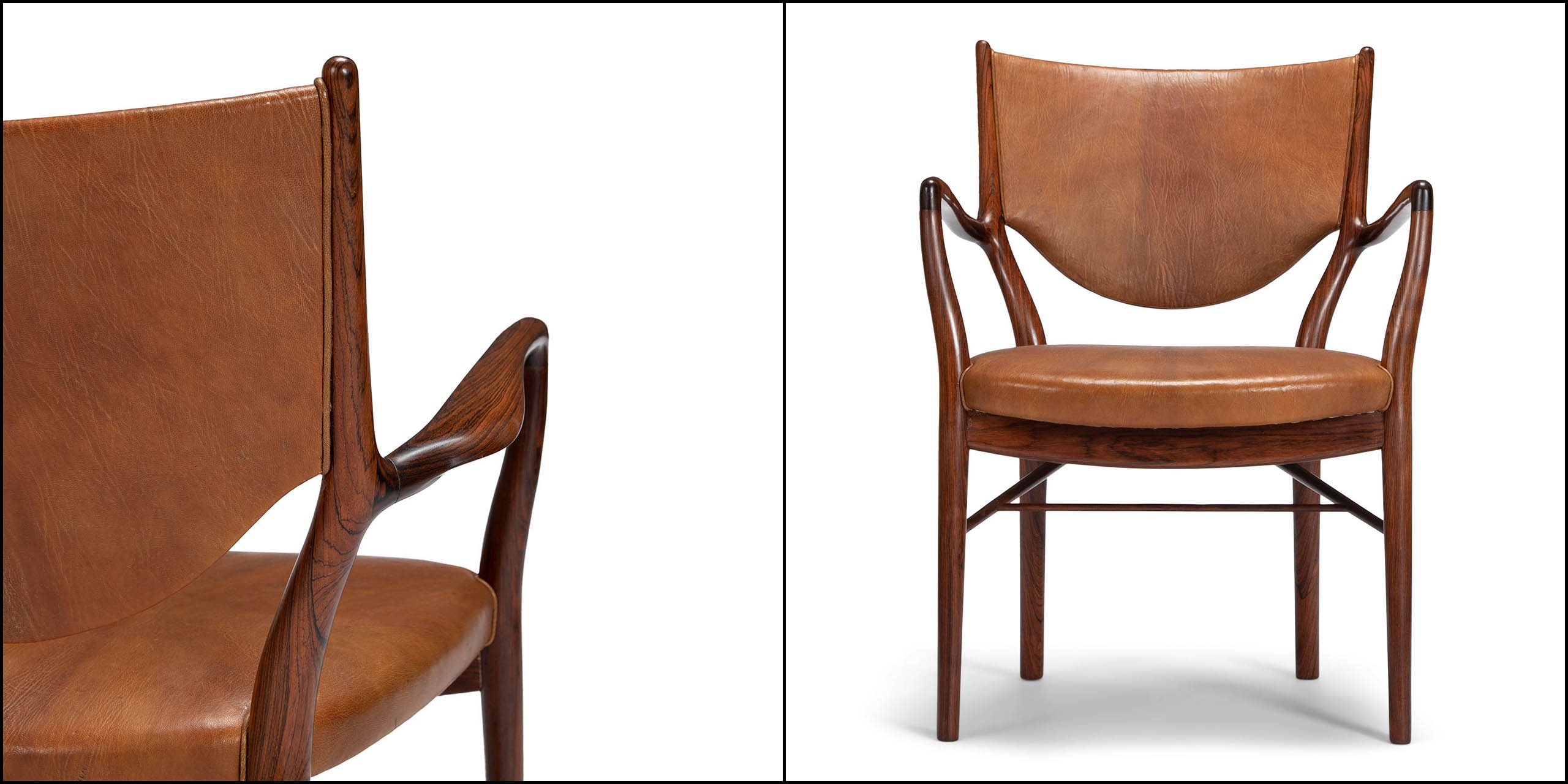 The NV46 chair – presented at the Copenhagen Cabinetmakers’ Guild Exhibitions in 1946. With its finely rounded and delicate lines, it remains one of the finest examples of Finn Juhl’s refined idiom

It is said that Vodder was the only cabinetmaker who dared tackle Juhl’s often technically complicated designs. The innovative architect did not always consider the degree of craftsmanship required to carry out his sculptural forms and his furniture demanded untraditional and difficult joinery. Niels Vodder welcomed the challenge, advising Juhl what was conceivable and developing the designs with Juhl accordingly. Vodder’s highly developed skills perfectly matched Juhl’s visionary designs. Their public debut came in 1937 at the annual Copenhagen Cabinetmakers’ Guild exhibition and their fruitful partnership lasted for more than twenty years. 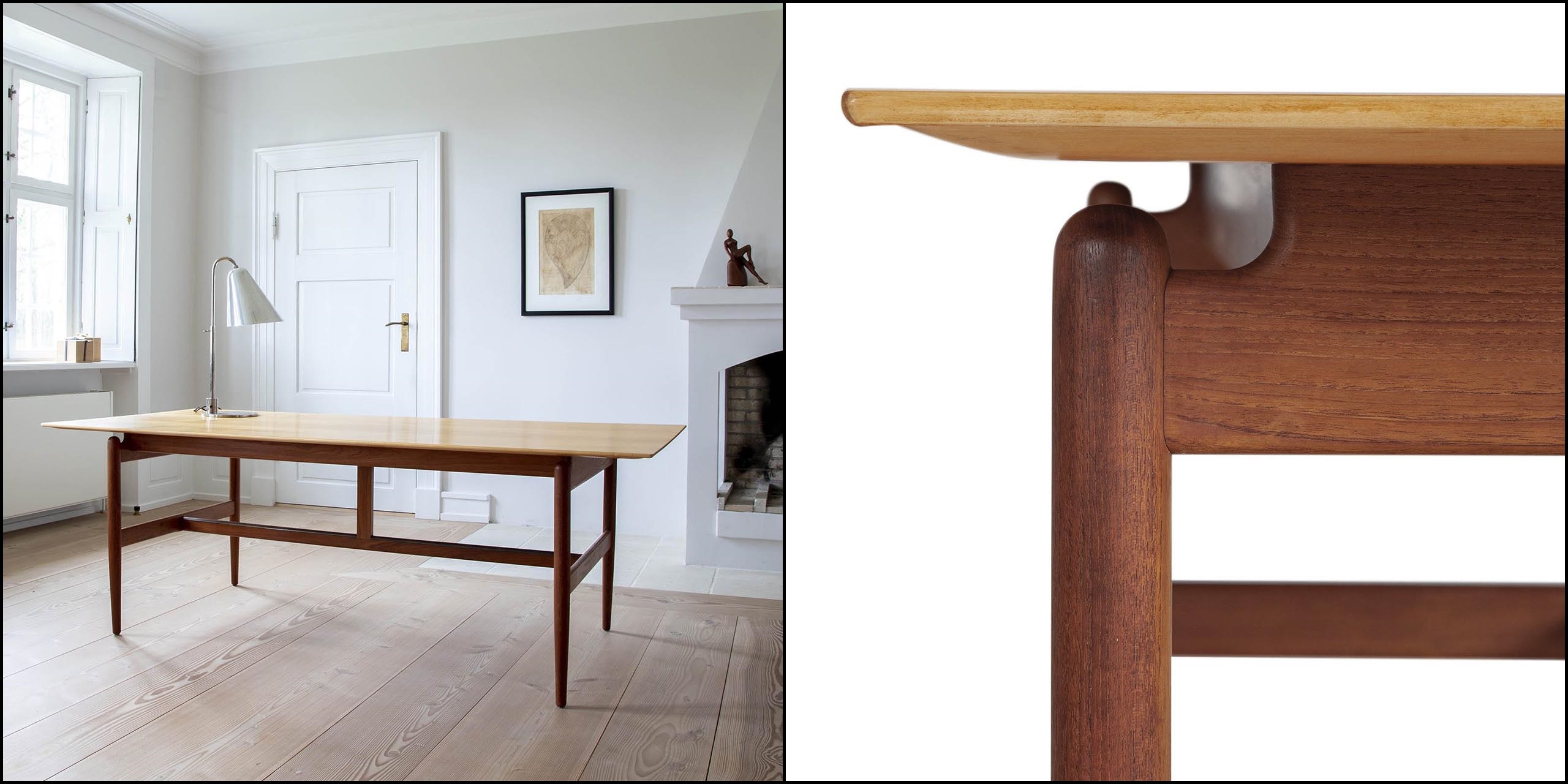 Work table – presented at the Copenhagen Cabinetmakers’ Guild Exhibition in 1945. Attaching the legs to a transverse rail, Juhl achieved a visual lightness to an otherwise large table. The use of different materials, maple for the top and teak for the base, also serves to define the separate elements

“The craftsman’s ability to form is probably the same as that of a sculptor. A chair is not just a product of decorative art in a space; it is a form and a space in itself” Finn Juhl, 1952. 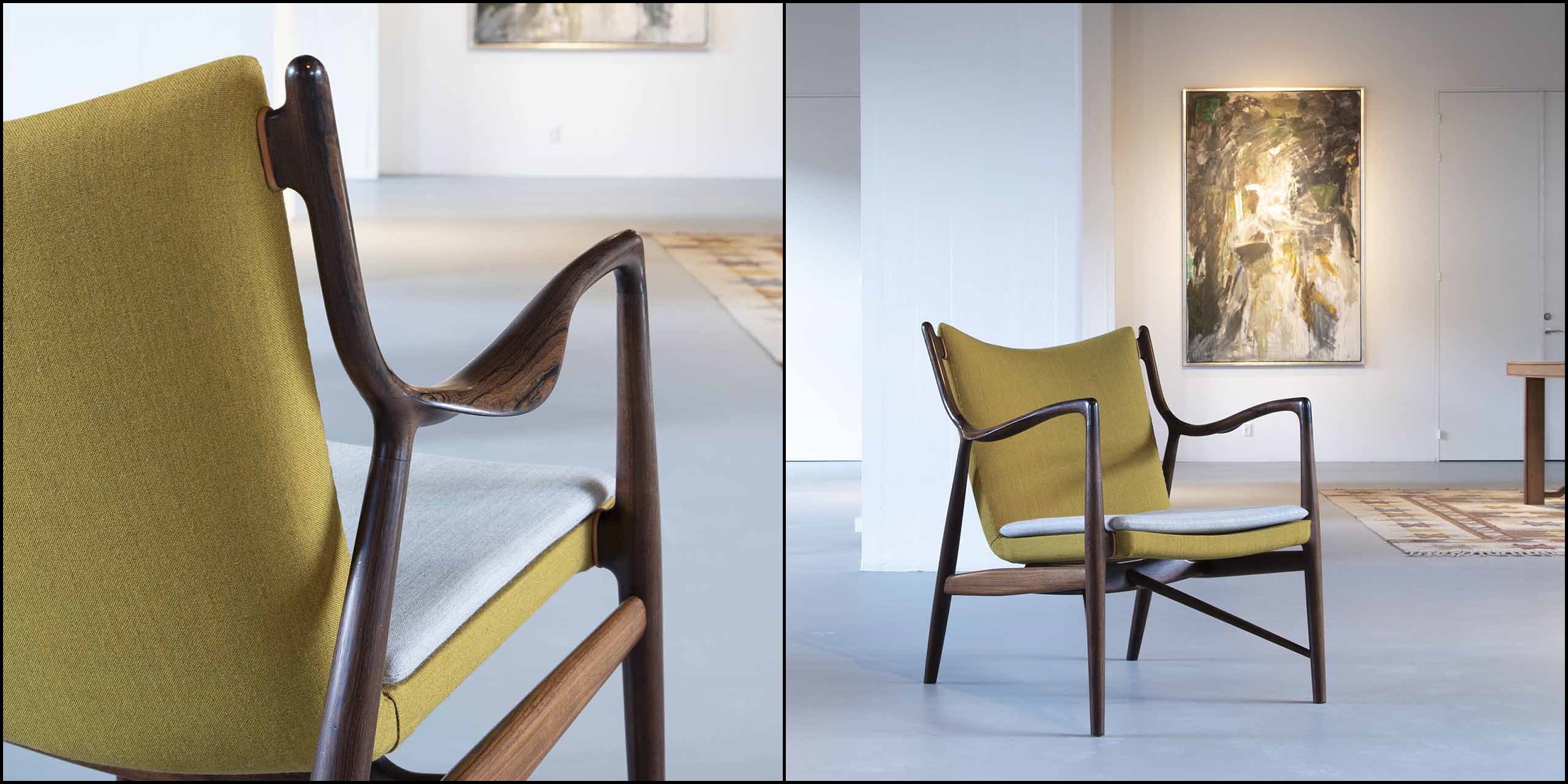 The highly acclaimed NV45 chair – presented at the Copenhagen Cabinetmakers’ Guild Exhibition in 1945. The seat and back float above the wooden frame as an accentuation of the balance between “the supporting” and “the supported” elements – creating a very organic, light and slender form

A rare sofa, designed in 1956. On this occasion Juhl worked in metal, but once again laying bare the frame from the upholstered element, resulting in an otherwise large, upholstered body appearing to visually float above its base 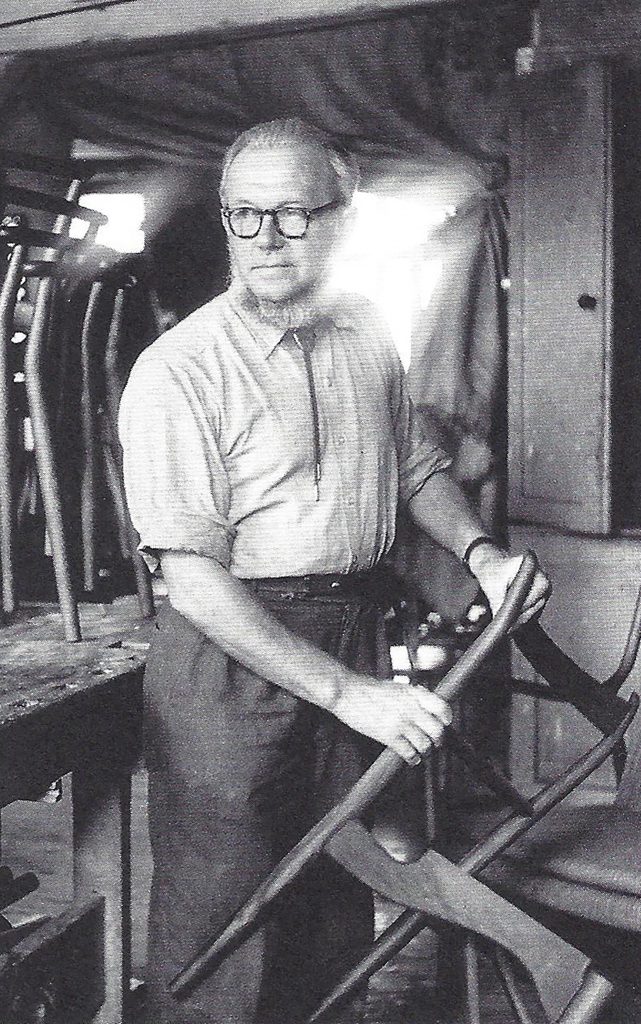