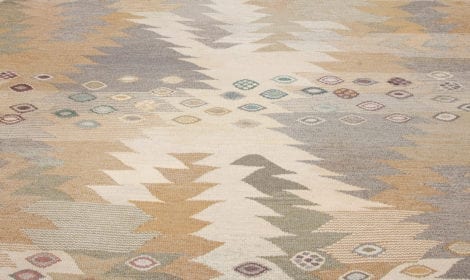 In 1919 Märta Måås-Fjetterström started her textiles workshop in the little town of Båstad, in the southwest of Sweden. She created designs for rugs and furnishing fabrics which were then woven by local women. Her most important source of inspiration was the Swedish countryside with its profusion of wild flowers and animals. In 1934, at the age of 61, she achieved a definitive breakthrough at an exhibition at the gallery Liljevalchs Konsthall in Stockholm. Two years later, in 1936, her designs were shown at the British Museum in London and in 1939 she exhibited at the Metropolitan Museum of Art in New York.

When Märta Måås-Fjetterström died in 1941, a group of people interested in the arts took steps to ensure that the workshop survived. The group consisted of the director of the Nationalmuseum in Stockholm (Sweden’s national art museum), Carl Malmsten (renowned for his handcrafted furniture), Eric Wennerholm (a leading Stockholm lawyer), King Gustav V and the crown prince who was to become Gustav VI Adolf.

They chose Barbro Nilsson, a reputed textile artist, to carry on the work in Båstad and at the same time ensured that the workshop was to be open to young artists to maintain a living environment. Nilsson was one of the few textile artists capable of weaving her own designs; she had undergone a long training in textiles and was a very skilled weaver.  During the years 1934-1947 she taught at the University College of Arts, Crafts and Design in Stockholm and was head of the textiles department from 1947 to 1957. Nilsson’s designs are characterized by a rich sense of colour. She lived by the seaside and many of her works were inspired by the sea and the movement of the waves. The present design, “Tånga” (Seaweed) is one such composition with numerous, short diagonals, rhythmically arranged in repeated verticals.