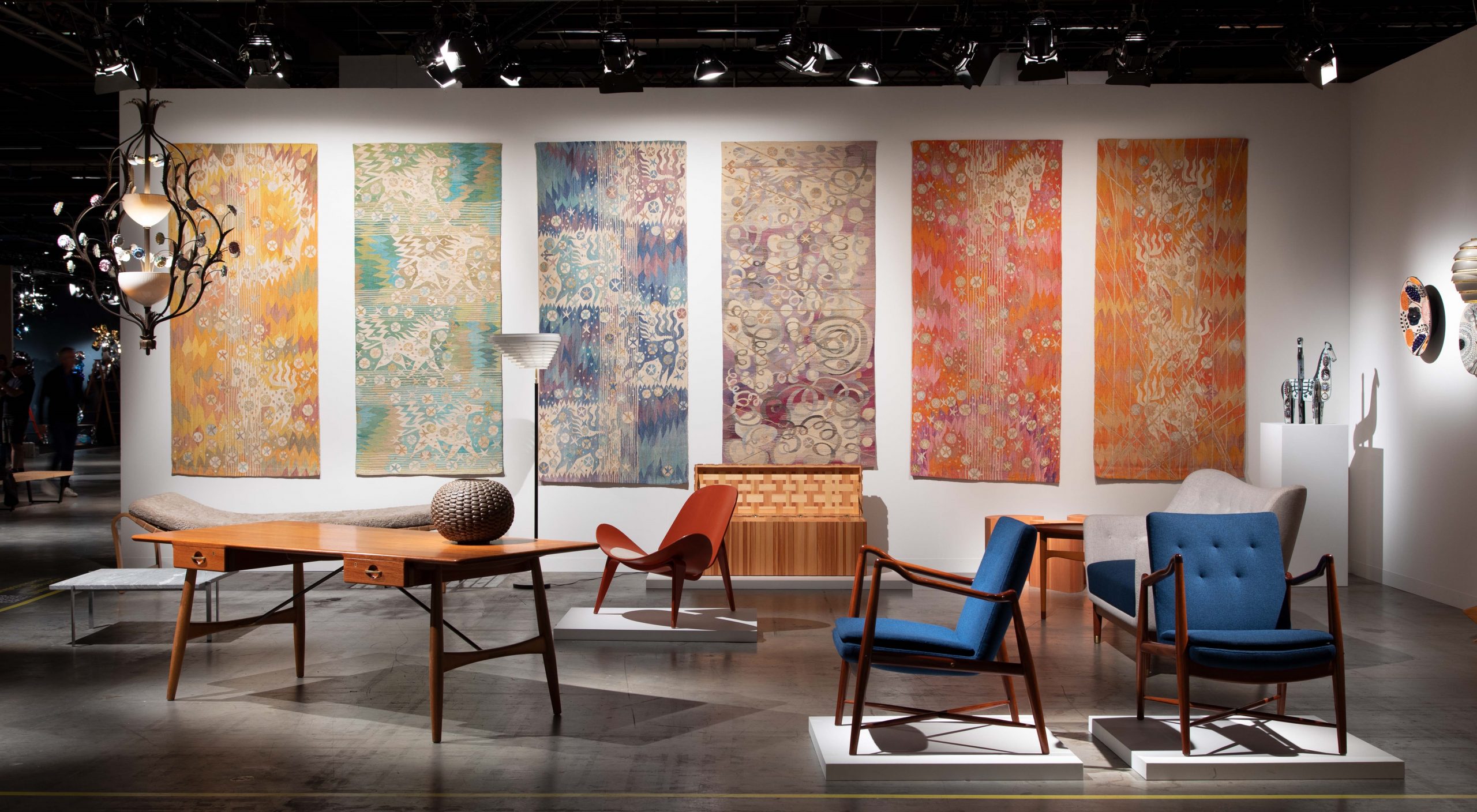 Swedish textile artist Barbro Nilsson was a leading figure in the field of 20th century Nordic textile design. For nearly three decades, she held the position as artistic director at the MMF workshop, managing the legacy of Märta Måås-Fjetterström’s work. With a profound knowledge of the art of weaving, a strong sense of colours and high-quality materials, Nilsson pushed the boundaries of what was possible in rug and tapestry weaving. 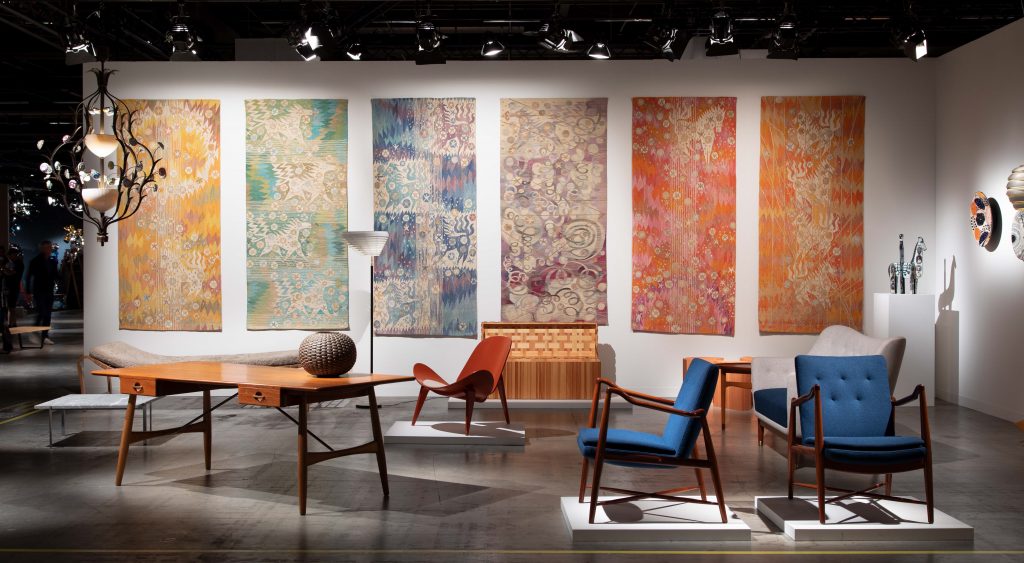 In 1966, the studio was commissioned to produce a series of tapestries for the new headquarters of Sydsvenska Kraft AB, one of Sweden’s largest hydropower companies, located in Malmö. For this project, Nilsson chose to incorporate the river horse, also known as the “Bäckahäst, a mythological creature from Swedish folk art. A motif that also appears in the imagery of her predecessor.

The six tapestries were designed as a complete work, as it represents a thematic depiction of individual, energetic forces. The series is linked with the Bäckahäst as a recurring motif and symbol of natural forces, vigorously galloping through the whole series, whereas the use of different base colours in each tapestry symbolise the different aspects of water-produced energy. Nilsson designed the six tapestries to be hung in a particular order to tell the story of how water is turned into energy.

From left to right the tapestries are titled and represent Solen (the Sun), Åar (Rivers), Forsar (Waterfalls), Ångan (Steam), Atomkraftverk (Nuclear power) and Linjenätet (The electric grid). The corresponding base colours are from left to right: yellow, green, blue, purple, red, and orange. Once again, Nilsson’s colour palette is vibrant and subtle, further enhancing the pattern’s visual texture. She created a refined interplay of colours ensuring that the base colour of each tapestry had hues pointing toward the next colour of the spectrum. In each tapestry the horses are placed differently, moving in different directions and positioned to further suggest the particular aspect of energy being represented.

In an article from the energy company’s in-house magazine, Nilsson explained why she had chosen the Bäckahäst as her motif:

“In local people’s imagination the mists over the rivers of Skåne took the form of a mythical figure, the horse known as Bäckahästen, that gallops over the landscape – through AIR, CLOUDS and RAIN, through the SLOWLY RUNNING WATER, through RAPIDS and WATERFALLS to the SEA. The water provides STEAM POWER. The flowing water is converted into electric power that is distributed to the industry through the ELECTRIC GRID and regulated by SWITCHES. Six of the seven tapestries are in colours that form part of SPECTRUM. These are colours that appear when the rays of the sun, the source of all natural forces, are refracted through the rain. The rain provides water to rivers and rapids. The colours of the seventh tapestry are inspired by the blue hues of the air, the clouds and the sea.”

The tapestries were demanding to weave and required patiently executed detail work. Nilsson combined different techniques pushing the boundaries of what was possible in tapestry weaving. While some of the tapestries (yellow, blue, red, and orange) were woven using traditional tapestry techniques, others were woven in one direction, as flat weave rugs, but with the tapestry technique of picking the wefts by hand – making it easier to weave in freer forms – and with the method of packing the wefts with a small handheld implement, instead of using the loom’s batten to push the woven threads together. These are subtle technical differences, only visible if you look closely, but they testify to Nilsson’s profound knowledge of the art of weaving and her innovative and experimental approach.

A tag on the back of each tapestry states where the tapestries were woven and by whom, thus recognizing the indispensable role of the craftswomen who created them. The tapestries were all woven in Barbro Nilsson’s own workshop in Stockholm, where many of her weaving assistants were former students from Konstfack who shared her values and the commitment to quality that distinguishes the handicraft tradition. “I wish to see my patterns created by highly skilled people, and I make demands on their discernment and co-responsibility. This is how the creations are filled with life and warmth”, she once said.

Technically audacious and visually stunning, this series of six tapestries are considered to be a principal work in Nilsson’s career, as well as within Nordic textile art, enlarging and renewing the Nordic weaving tradition. The series has been described as the textile equivalent of a symphony with its various movements and explorations of themes and techniques. It cemented Nilsson’s status as one of the foremost Nordic textile artists of the 20thcentury who successfully managed to develop the pioneering artistic programme of the Märta Måås-Fjetterström workshop and attain its position as the epicentre of 20th century Nordic textile art. 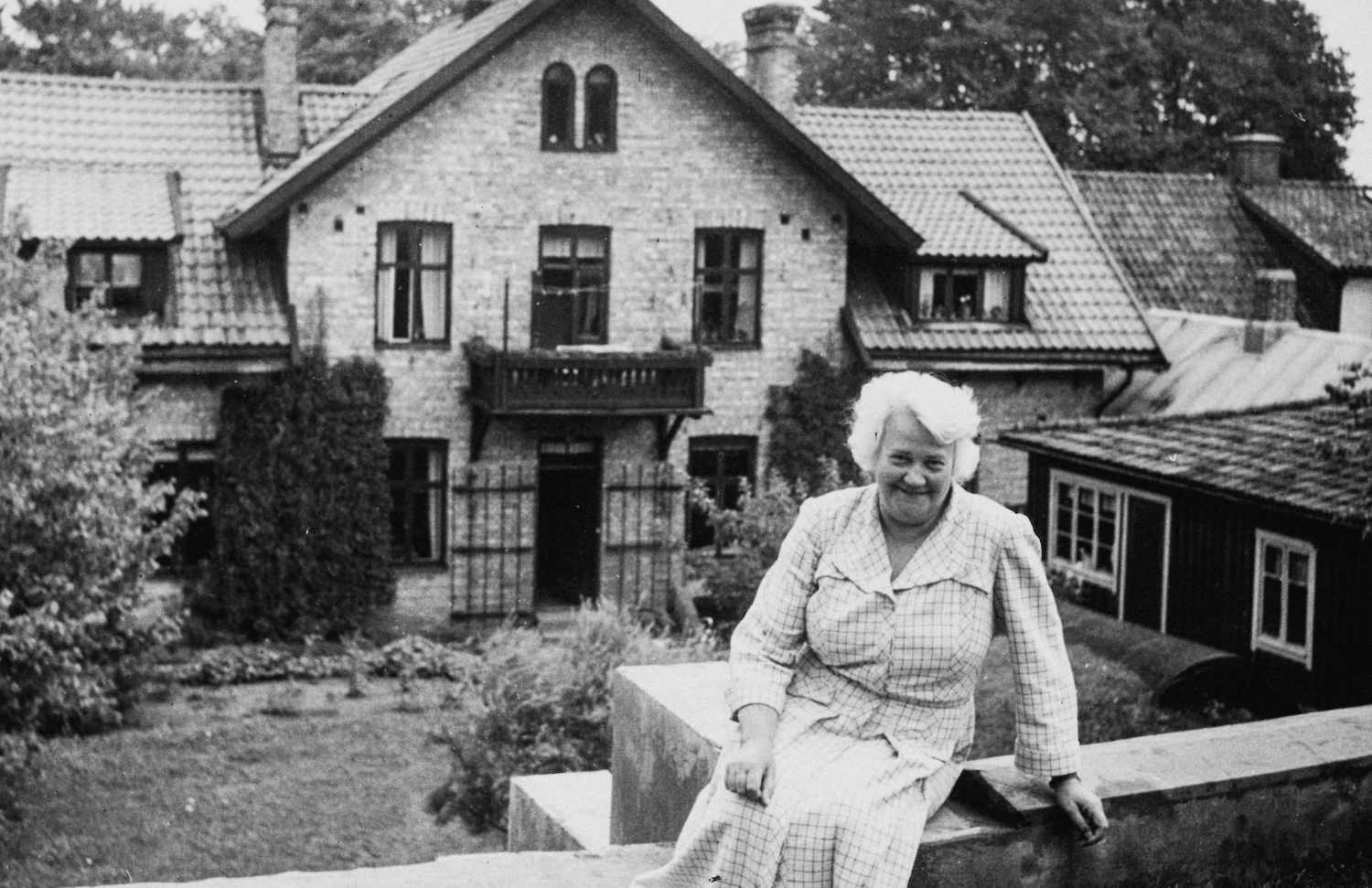 Barbro Nilsson outside the studio in Båstad, Sweden