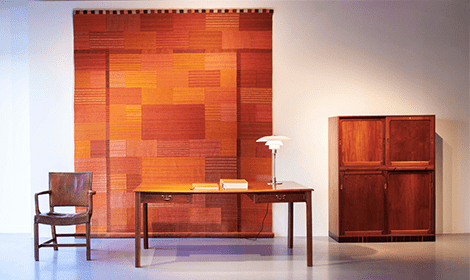 Dansk Møbelkunst Gallery is pleased to present a new exhibition, highlighting the early period of modern Danish design and one of its most influential figures, Danish furniture architect Kaare Klint.

Kaare Klint (1888-1954) was one of the great pioneers of 20th century modern design. Like many of his contemporaries, counting Le Corbusier and Walter Gropius, he advocated standardisation and functional forms, but his work did not mark a break with the past in terms of an industrial turn, rather it evolved out of the cabinetmaking tradition and a partiality of warm, natural materials. As an architect, furniture designer and leading professor at the Department of Furniture Design at the Royal Danish Academy of Fine Arts, Klint combined rational analyses and a profound understanding of modern lifestyle with traditional crafts methods and carefully chosen materials.

The exhibition shows a selection of Klint’s most notable works, including a sideboard designed in 1930 and made by Rud. Rasmussen. The sideboard is often described as one of the defining works of Klint’s career, a work that not only condenses his theoretical approach, but also a down-to-earth understanding of the practicalities of everyday life. Together with his students Klint compiled a list of all the objects a sideboard might contain, accompanied by the standard dimensions on all objects. “These experiments formed the basis for a simple systematic organization of china and glass by size. In reality, the basis for a standardisation,” Klint later explained. The final result was a sideboard designed to contain a multicourse dinner service for 12 persons. Behind the sliding doors, the interior is divided into four compartments with sliding trays that can be pulled out to provide easy access to the contents and removed entirely for carrying the objects to the table. The design is characterised by a refined simplicity that clearly demonstrates Klint’s functional approach as well as his visionary sense of modern aesthetics.

Another highlight of the exhibition is a rare pair of Mix chairs in Cuban mahogany and Niger leather, designed by Klint and Edvard Kindt-Larsen in 1930 and made by Rud. Rasmussen. The design is yet an example of the close collaboration between Klint and his students. Kindt-Larsen was a student of Klint and worked on the chair while still in training. The Mix chair has a low back and loose seat and back cushions. The upper part of the back is slightly curved, just as the front of the seat. The elegant curve of the back flowing into the rear legs is repeated in the lines of the armrests and gives the overall impression of an easy chair with soft, organic contours. Kindt-Larsen’s touch is evident in this organic outline, whereas the character of the materials is a clear testament to Klint’s devotion to a few noble materials. He favoured Cuban mahogany for its homogeneity and beautiful reddish-brown colour and preferred Niger leather for its ability to become even more beautiful with time.

“Klint’s impact on Danish design can hardly be overestimated. With the combination of simple, pragmatic structures, a strong emphasis on high-quality materials and the art of craftsmanship, he initiated a renewal of the cabinetmaking tradition and influenced several generations of talented Danish furniture designers”, says owner of the gallery Ole Høstbo. The exhibition will be shown from December 5, 2019 to January 11, 2020 in our Paris Gallery.