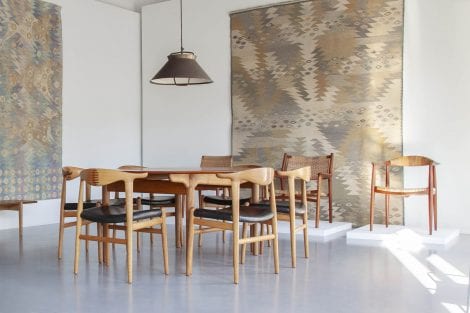 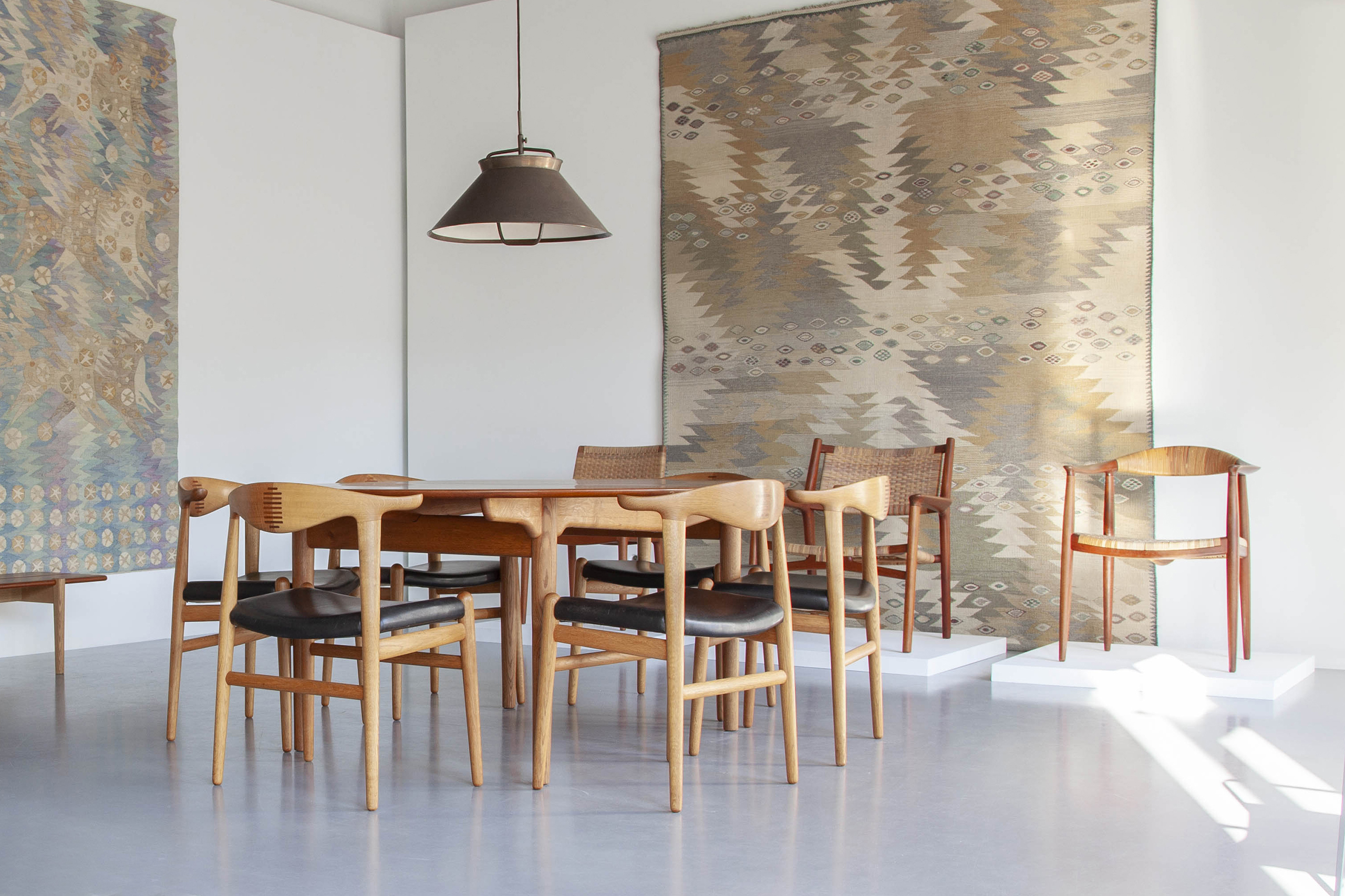 It is not possible to discuss the design of Hans J. Wegner (1914-2007) without equally mentioning master cabinetmaker Johannes Hansen. A distinctive feature of furniture making in Denmark in the 20th Century was the close collaboration between architects and craftsmen – Wegner and Johannes Hansen enjoyed one of the most fruitful collaborations of the period. 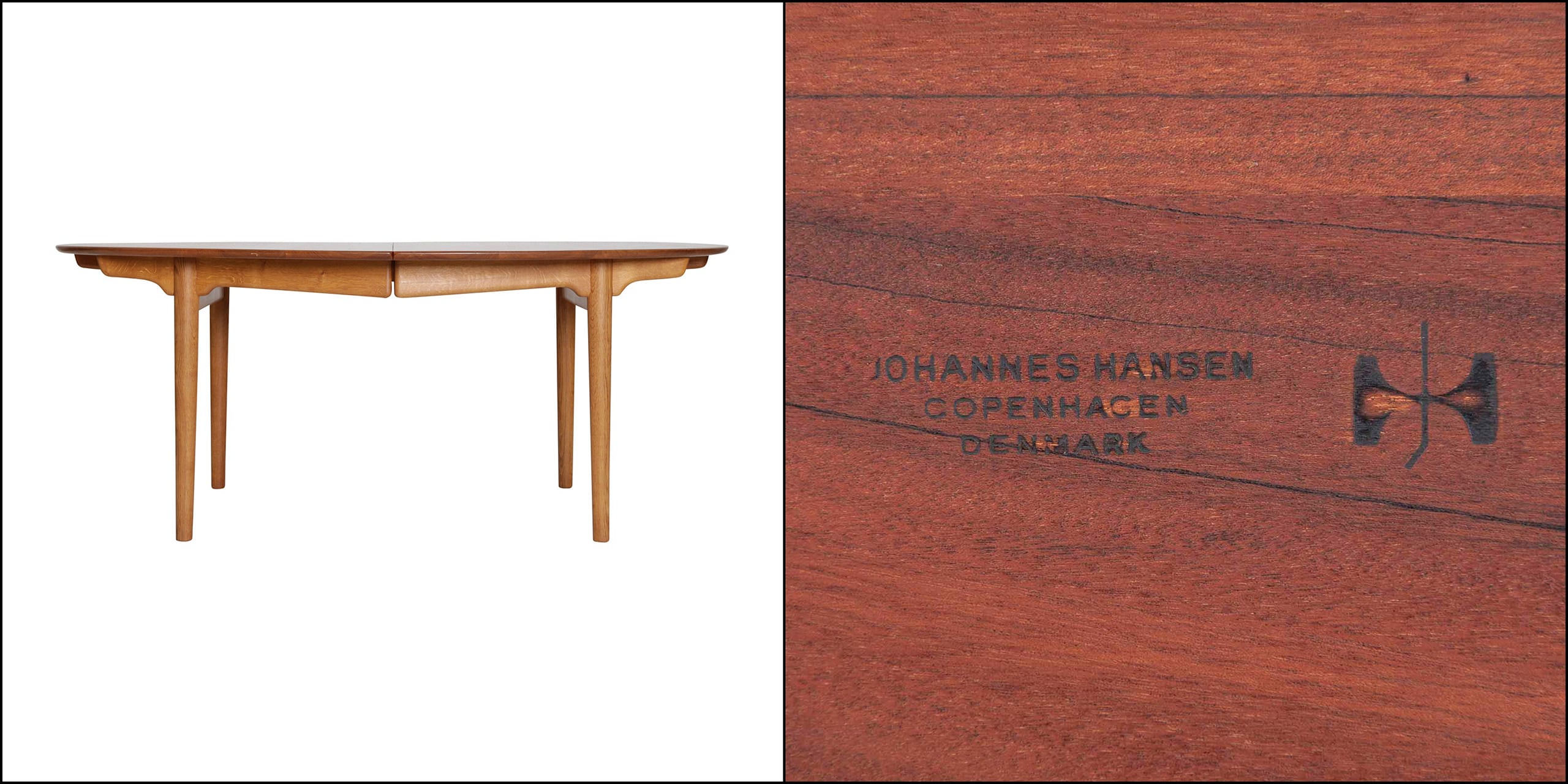 An extendable oval dining table. Solid teak top with base in oak. First presented at The Copenhagen Cabinetmaker’s Guild Exhibition, 1952

Johannes Hansen (1886-1961) was an instrumental figure in establishing the annual Copenhagen Cabinetmakers’ Guild Exhibitions in 1927 in which he participated until his death in 1961. Wegner and Hansen’s first joint venture at the exhibition was in 1941. Wegner was 27 years old at the time. Johannes Hansen was 55 and undoubtedly the experienced cabinetmaker recognised the unmistakable talent of this young newcomer. It is however unlikely, that he would have foreseen, that Wegner was to become one of the most celebrated designers of his time. 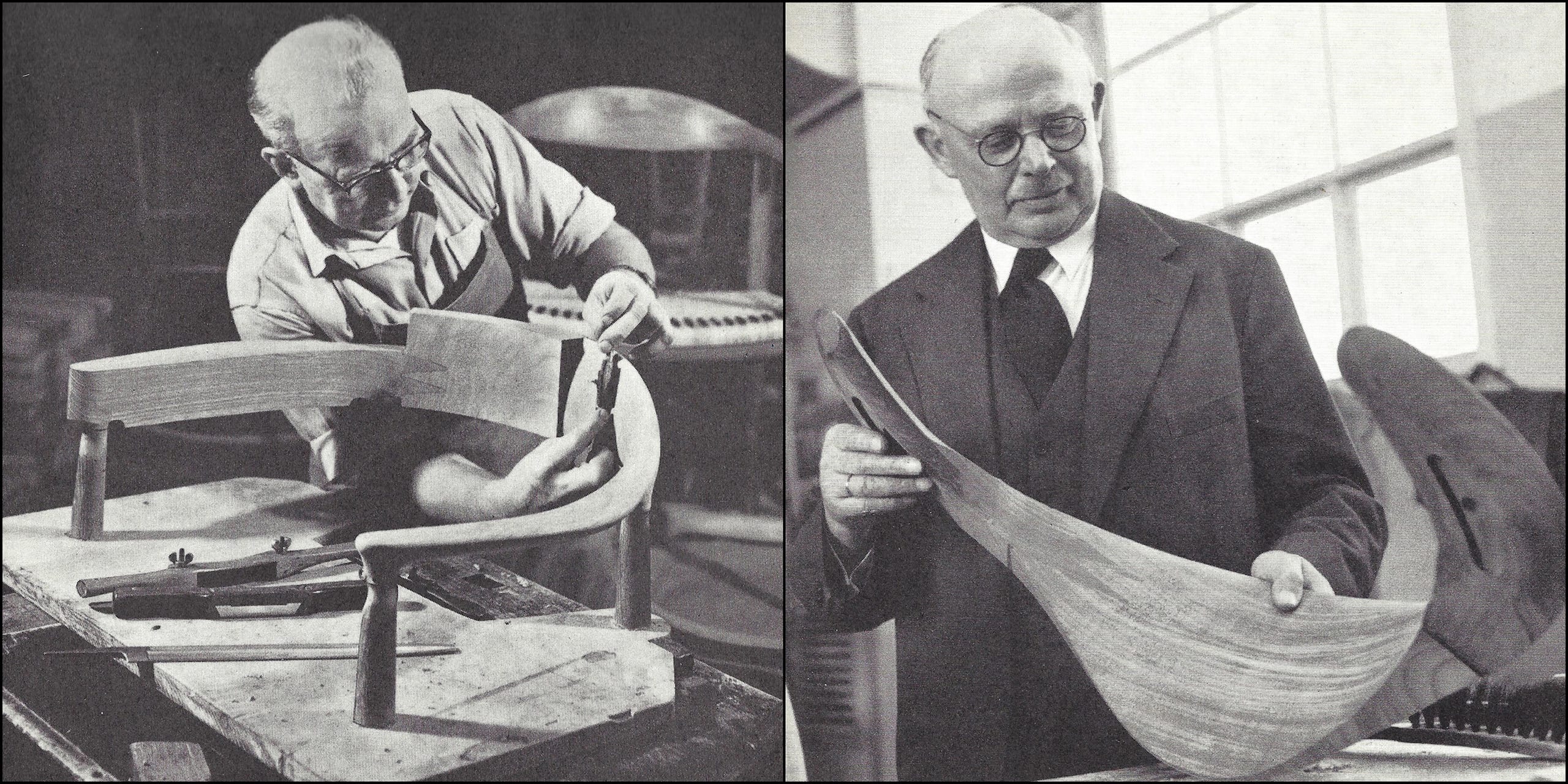 It is important to note, that Wegner was in fact a highly skilled craftsman in his own right, having completed his training as a cabinetmaker in 1931 before subsequently entered the Copenhagen School of Arts & Crafts. In Johannes Hansen he found an equal with a shared devotion to quality, a profound sense of materials and respect for the handicrafts traditions. Working closely together Wegner and Johannes Hansen radically cultivated and explored the cabinetmaking tradition, creating handcrafted furniture of the highest aesthetic and material quality. 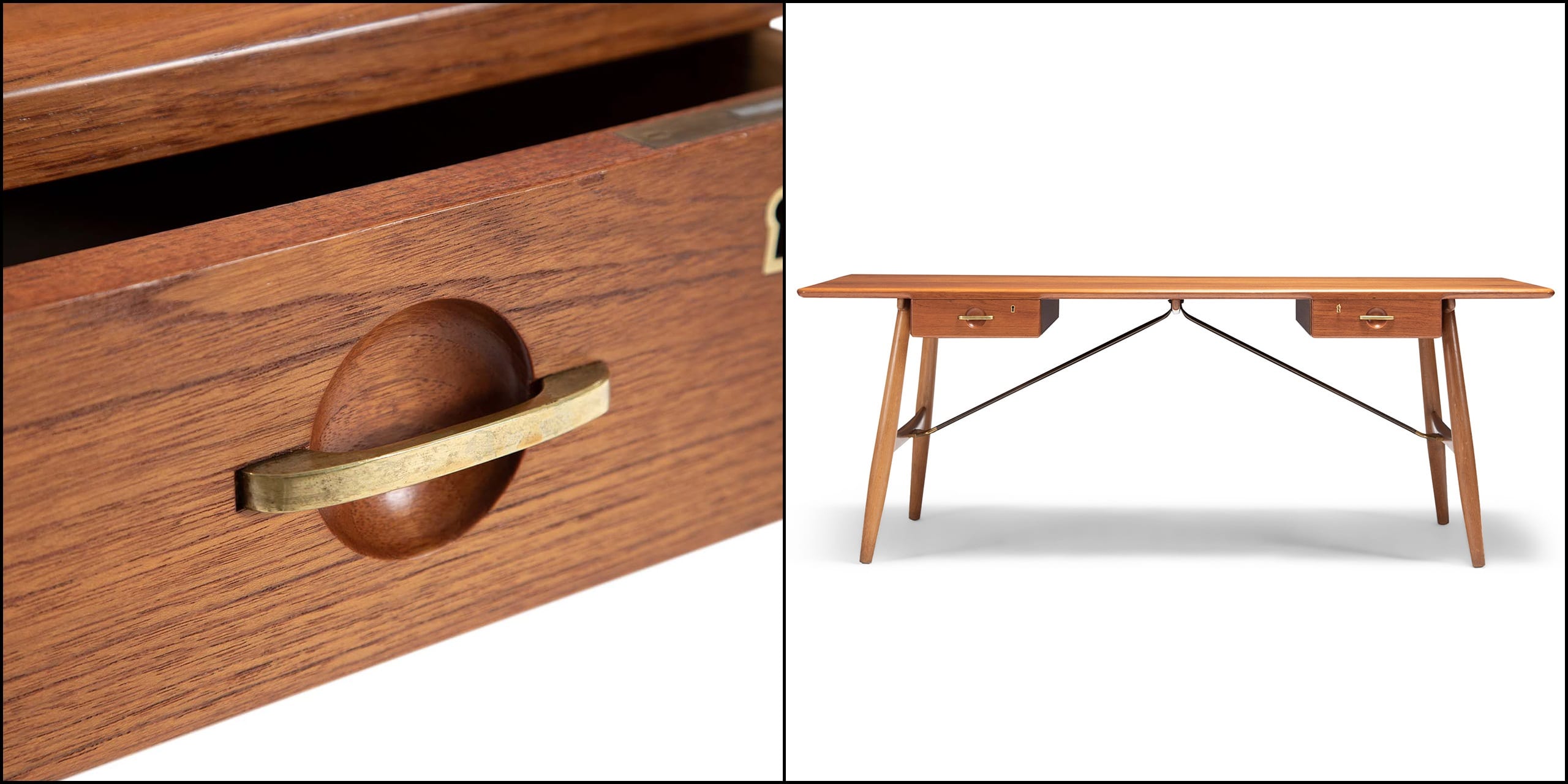 The Architect’s Desk designed in 1953 is one of Wegner’s most grandiose pieces, characterized by a sound, powerful presence and a strong graphic outline. It beautifully testifies to Wegner’s exquisite sense of organic, sculptural lines, as well as to the subtle treatment of wood and carefully executed details so characteristic of Johannes Hansen’s work. 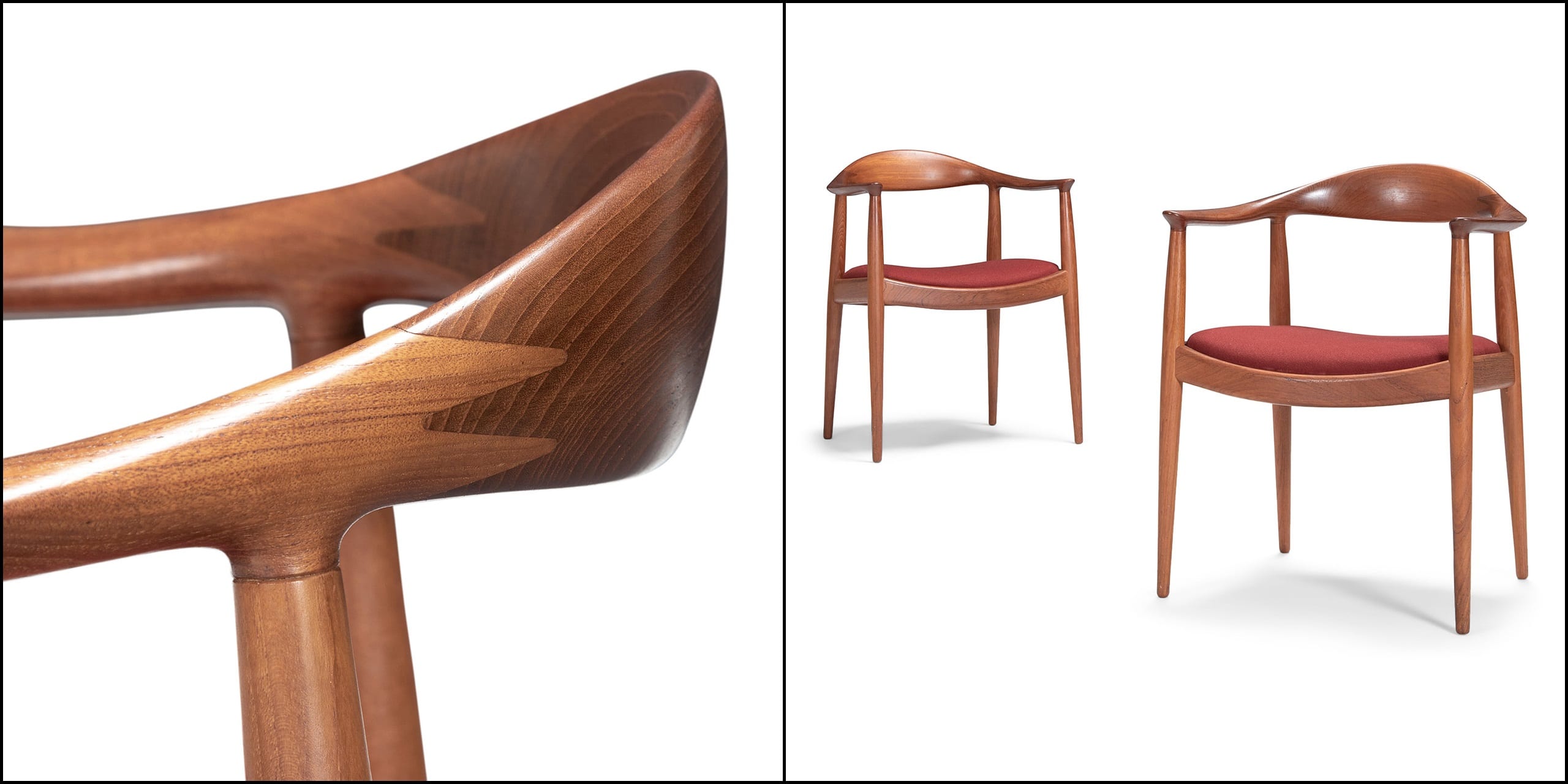 The Round Chair, designed in 1949, is the perfect example of a well-designed, elegant armchair.  It is simple, comfortable and extremely well made, yet another testament to the outstanding craftsmanship. There is nothing superfluous about it, no unnecessary details – instead, Wegner drew attention to the decorative features of fine cabinetmaking by accentuating the joints as beautiful zigzag patterns. He was one of the first to succeed with the vibrantly turned shaping of the back, giving the chair its expressive form. 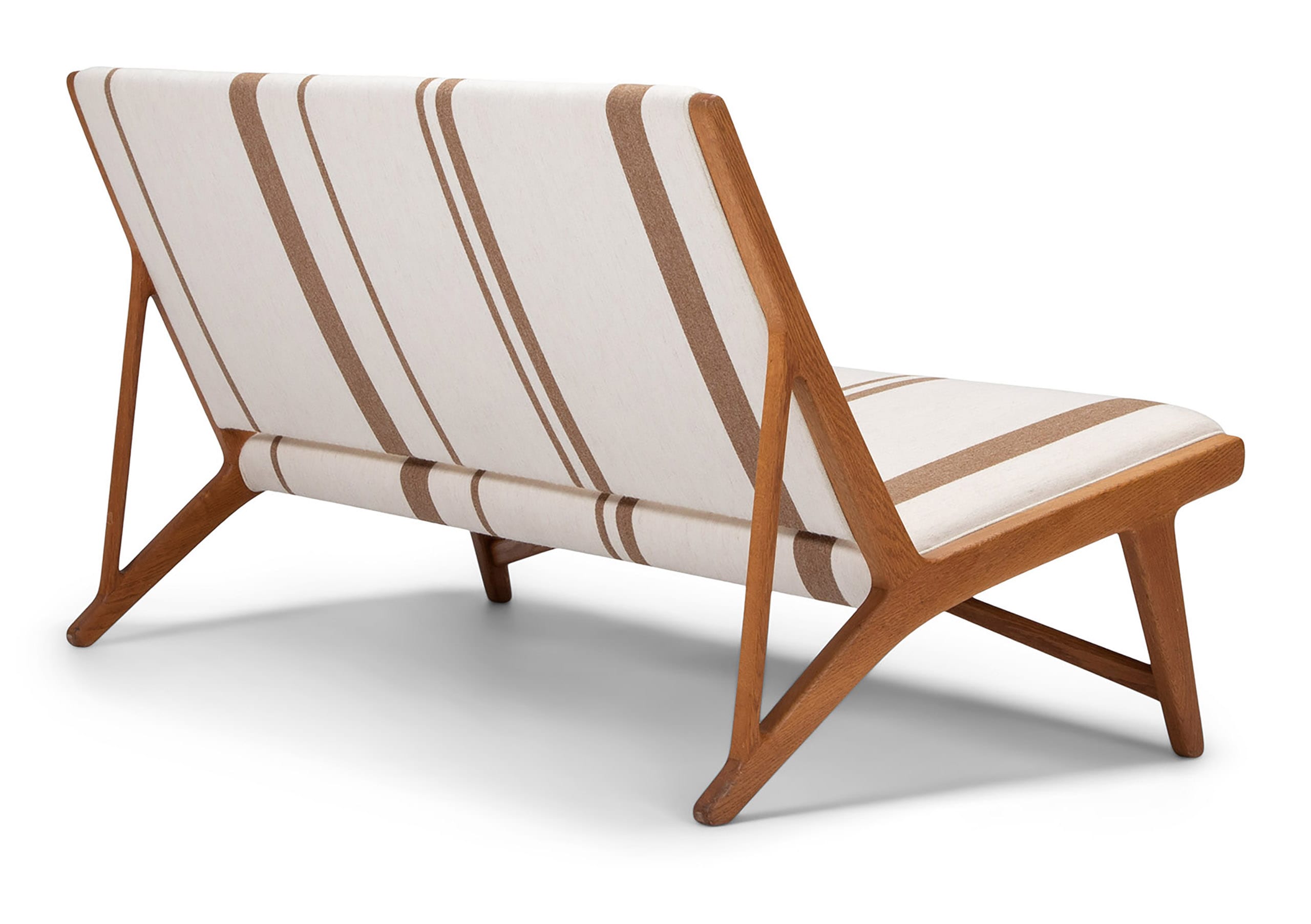 Bench with an exposed frame in oak, 1949 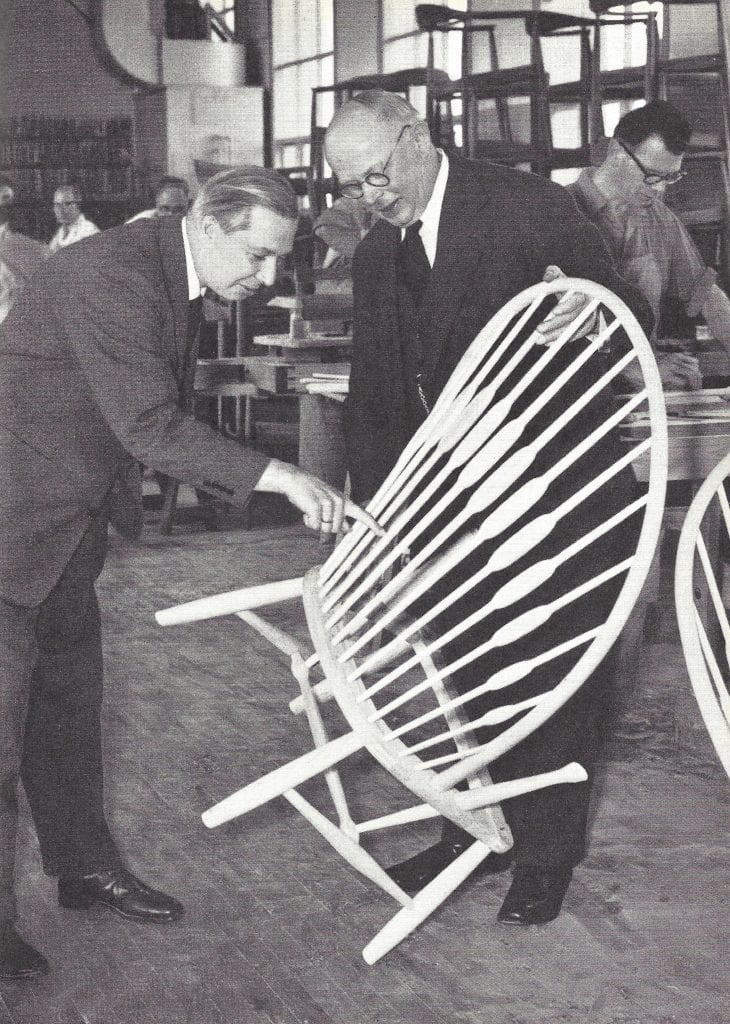