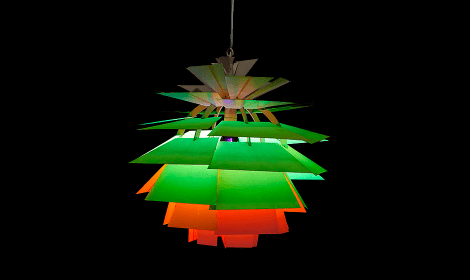 Poul Henningsen had a strained relationship with the fluorescent light tube. Having conquered the glaring light of the electric bulb in the 1920’s with his patented 3-shade system, he had nothing good to say about the poor colour presentation of the fluorescent tube. So when he was called upon to design the lighting for the exhibition ”The House of the Day after Tomorrow” in Forum Copenhagen in 1959, he designed a lamp unlike any other PH lamp. It is best described as a creative and passionate comment on the entry of the fluorescent tube. 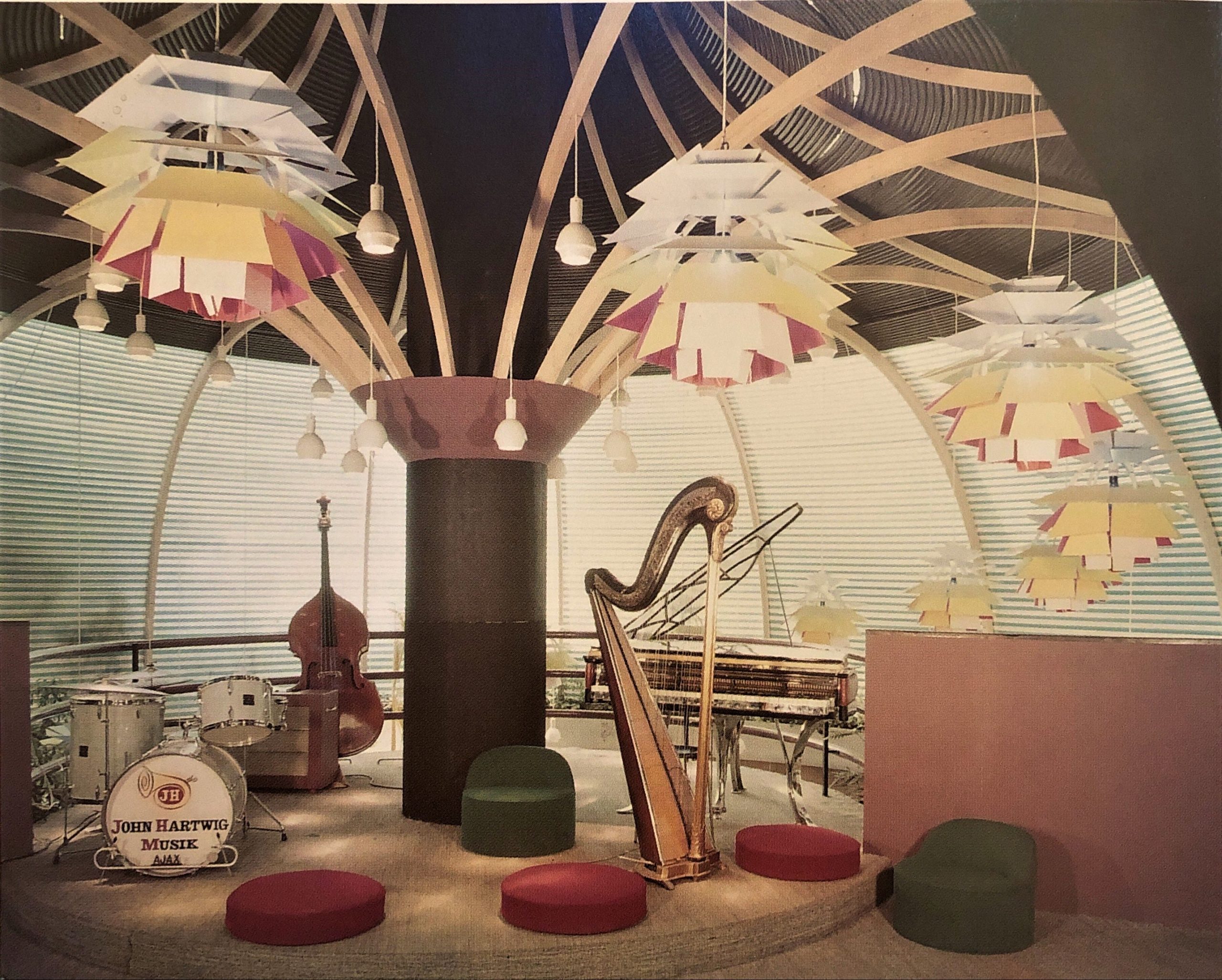 “The House of the Day after Tomorrow”
In 1959 architect Ole Helweg (1916-2001) was assigned the task of designing the exhibition “The House of the Day after Tomorrow” (Danish: Huset af i Overmorgen) assisted by Swedish designer Torsten Johansson (1917-1996) and Poul Henningsen (1894-1967). The purpose of the exhibition was to stage and illustrate the interior of the future, if one abstracted from the usual practical and constructional constraints. Helweg built a house with a basic circular shape. The interior was organized into a circular living space, just like ‘The House of the Future’ project from 1929 by Arne Jacobsen (1902-1971) and Flemming Lassen (1902-1984) which was their prediction of a future home. Both projects are obviously inspired by cylindrical shapes and characterized by a simplified approach eliminating all superfluous ornaments. 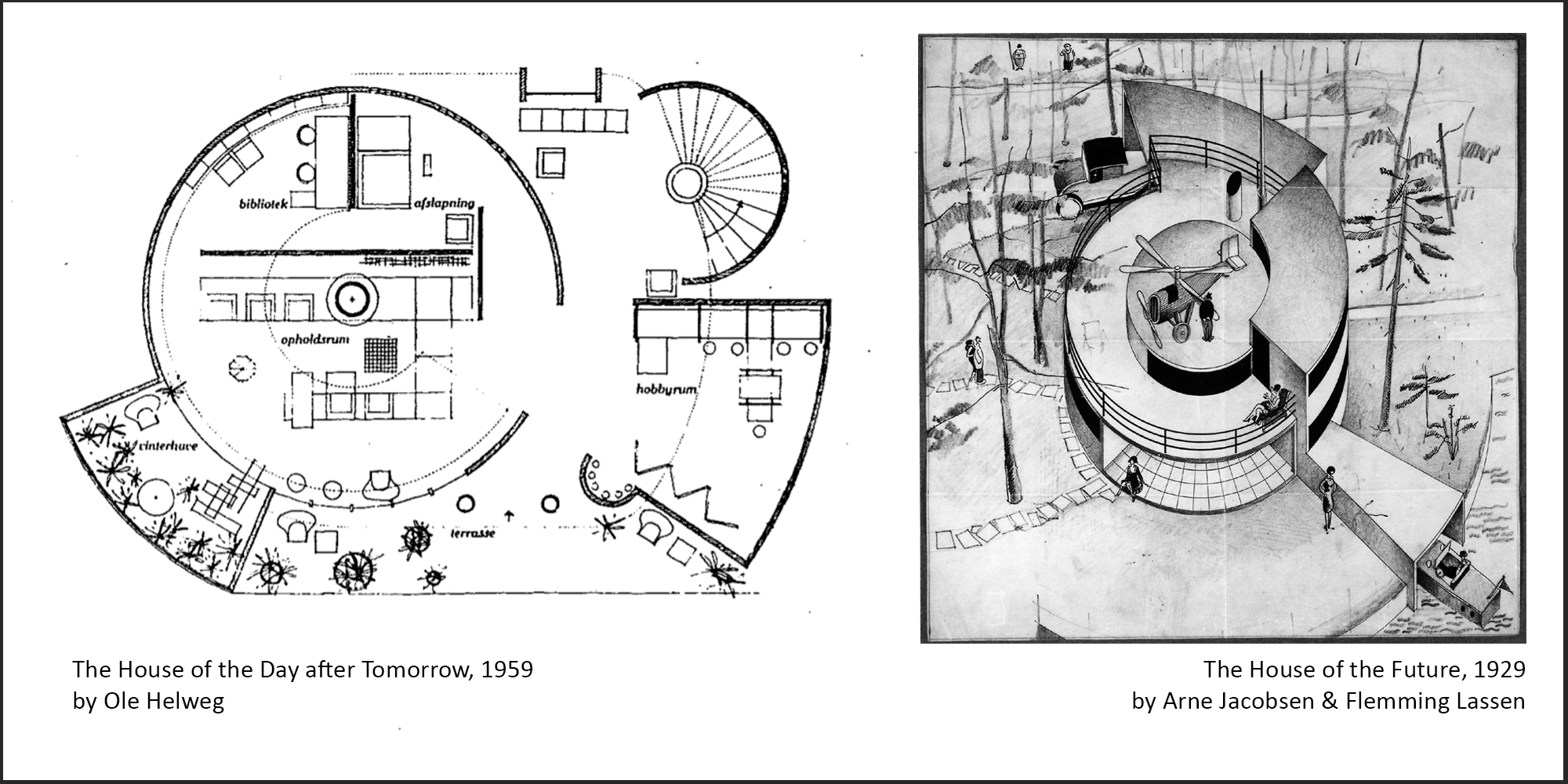 “Naturally, the lighting of the future can be nothing but a critique of the present. The large, varicoloured lamp, that is somewhat similar to the Artichoke chandelier in ‘The Langelinie Pavilion’, is an unrealistic poem of the fluorescent tube’s possibilites, if it had not been a tube but a fitting, and if it had only emitted ultra-violet light and not a line spectrum, too“. – Poul Henningsen on the Fluorescent Pendant , 1959 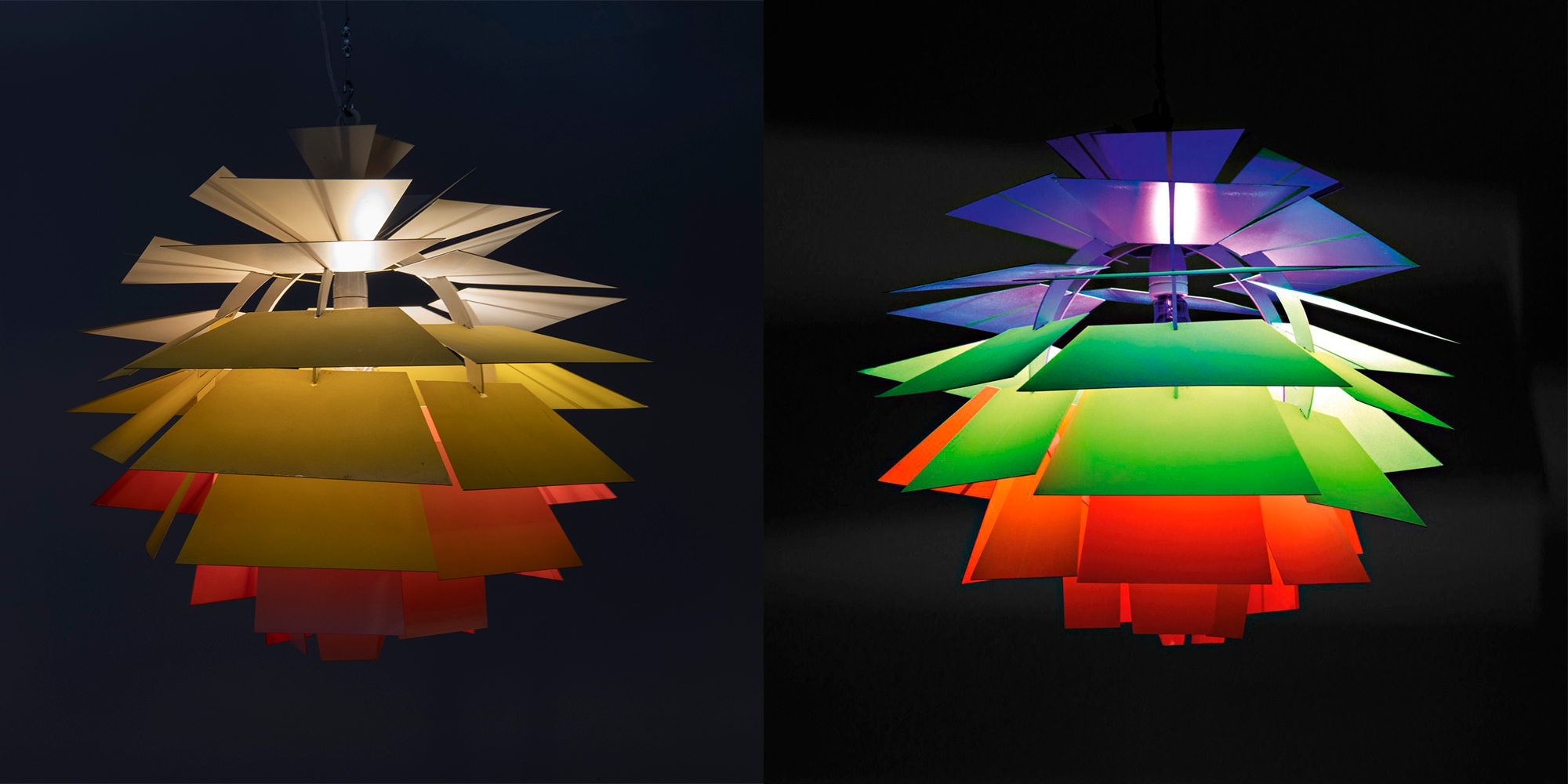 A utopian experiment
The lamp was designed one year after Henningsen’s acclaimed ‘Artichoke‘ lamp, designed for The Langelinie Pavilion. Unlike the Artichoke, the fluorescent lamp has an exposed light source and asymmetrical shades which, at first glance makes it look spontaneous and unfamiliar. However, the lamp is anything but spontaneous. It is asymmetrical as the shades circulate around the center of the lamp. The painted shades are mounted on a stalk, which, just like the Artichoke, embodies it with a weightless appearance.

The pendant consists of yellow, red and white shades, which by means of a fluorescent tube reveal an intense interplay of colours when lit. The light emanating from the yellow and red shades becomes fluorescent, while the white shades appear blue when struck by the ultraviolet light. Placed in a dark room, the pendant appears as a beautiful floating light sculpture.

The lamp was made exclusively for the exhibition and realised in only 15 examples. It is a unique experiment in its design and complexity – made by one of the 20th century’s most accomplished lighting designers. 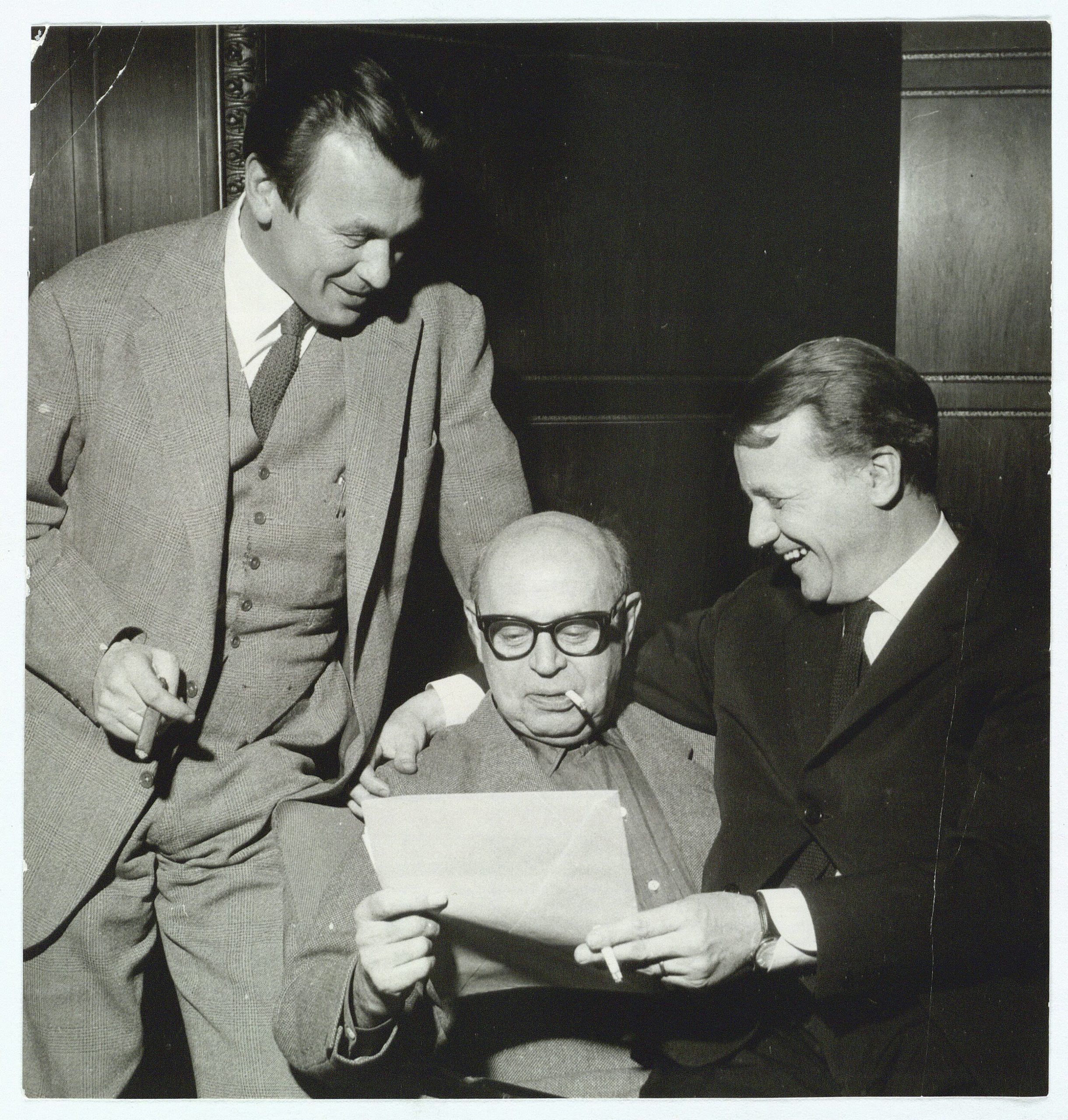